This is an important meeting.

The next few months will make a big difference to Ontario workers. Ontario is reviewing its labour and employment laws, with recommendations expected in the spring.

If we want MPPs to support decent work in Ontario we need to tell them what workers need, and we need to tell them now. MPPs need to know that it must be easier for workers to join and keep a union, and how to set workplace standards that will improve conditions for all workers in the province.

We look forward to seeing you there!

$15 and Fairness activists worked the huge crowds at this year's Labour Day picnic and filled up dozens of sheets of petitions for the campaign. Pictured above are Jordan Ellis, Karen Maleka (SEIU 1), Karen McKeown (Unifor 4304), David Eales (Unifor 1106), and Gary McKeown (Unifor 4304).

He raised the demands of the $15 and Fairness campaign, which is calling for sweeping changes to the Employment Standards Act and the Labour Relations Act as a way to address the growing phenomenon of exploitative workplace practices in low-paid, part-time, contract, and temporary jobs.

Accompanying Xuereb to Guelph were several other advocates for the $15 and Fairness campaign. Jesse Bauman works for the House of Friendship Emergency Food Hampers program, where one out of five emergency food recipients are employed. Karen Maleka is a home care worker and SEIU 1 activist who, along with hundreds of co-workers, works full-time hours but is classified as part-time so has trouble qualifying for a mortgage. David Eales, of Unifor 1106, represents personal support workers in health care facilities who are often employed in more than one part-time job with the same company at different locations. Jordan Ellis has worked at over 50 jobs in four years through a number of temp agencies: he's lost jobs for taking a sick day. WLUFA President Michele Kramer represents contract faculty at Wilfrid Laurier University who can work for years on contract earning slightly above minimum wage for the same teaching work done by their well-paid full-time peers.

Waterloo, April 15, 2015 - The Campaign for $15 and Fairness was launched in Waterloo Region today with a small rally at Waterloo Square hosted by the Alliance Against Poverty and supported by the Waterloo Regional Labour Council.

The campaign was launched simultaneously in a dozen cities across Ontario, and joined hundreds of low-income workers across the world in demanding a $15/hour minimum wage. In addition to the minimum wage demand, the $15 and Fairness campaign in Ontario is calling on Labour Minister Kevin Flynn to strengthen and enforce the Employment Standards and Labour Relations acts to prevent employers from exploiting workers by denying them basic rights such as sick time, control over their schedules, the right to form unions without employer interference.

Full-time Work Should Lift You Out of Poverty

Labour Council President Marc Xuereb had this column published in The Record on March 7, 2014. See original at http://www.therecord.com/opinion-story/4399344-set-ontario-s-minimum-wage-even-higher-to-reduce-poverty/.

On January 30th, Ontario Premier Kathleen Wynne announced her government’s intention to raise the minimum wage to $11/hour and index it to inflation. While this is a step in the right direction, I know that our prosperous province can do better.

Even the NDP’s proposal, announced just last week, to raise the minimum wage to $12/hour by 2016, will leave people working full-time at the minimum wage at 12% below the Statistics Canada Low Income Measure.

There is a reason that the Campaign to Raise the Minimum Wage set $14/hour as its target. A person making $14/hour full-time lives 10% above the poverty line. Isn’t it a reasonable proposal that if you work full-time, you should not have to live in poverty?

I was very proud of this decision, because it showed that unions care about more than just the welfare of our own members. Almost no unionized workers make less than $14/hour, yet the union movement has spent significant resources to draw attention to this issue. 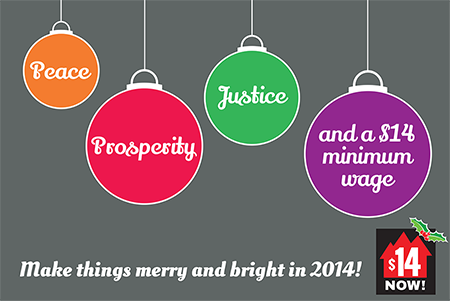 This holiday season we are asking Premier Kathleen Wynne to make 2014 brighter for all and to raise the minimum wage to $14.

On December 14, community members across Ontario will be collecting holiday cards for Premier Kathleen Wynne wishing for peace, prosperity, justice and a $14 minimum wage.

Join us at Fairview Park Mall this Saturday at 2pm to help distribute candy canes with a very important message: see details here.

Help us get the message out by sharing our postcard on Facebook.

On November 14th, we are taking our message directly to our elected Members of Provincial Parliament.  We will be letting them know that raising the minimum wage is good for our economy and good for our communities. We'll even award them a novelty cheque representing the boost to the economy that an increase would bring!